A Word from the Happy Hormones Doctor, Dr. Deb Matthew!

The benefits of hormone replacement therapy outweigh the risks!

[Deb Matthew MD, The Happy Hormones Doctor, suffered for years with fatigue and irritability. Her quest to restore her own health led her to change everything about how she practices medicine. Together, we discuss hormones, how they can affect us, and how to find someone to accurately assess your hormonal imbalance.]

The following is a summary of our chat on the Field Notes: An Exploration of Functional Medicine Podcast.

It turns out that hormone replacement therapy can provide important health benefits for women, and statistically you are better off being on it than not.

That is important. An entire generation of women got scared off hormone replacement therapy because their doctors told them it was dangerous, it was bad, and they were going to get breast cancer.

The big news about hormones causing breast cancer came out in 2001. I was in medical school in the early 1990s, and we were trained that we should put everybody on hormone replacement therapy for their own good, because it was going to prevent heart disease, dementia, and osteoporosis.

In 2002 a Women’s Health Initiative study concluded that hormone therapy causes breast cancer. Suddenly, hormones went from being the greatest thing since sliced bread to bad, dangerous, and scary. It’s important to note that the authors themselves admitted there were limitations to this study. They tested the effects of just one specific drug combination of synthetic estrogen and progesterone. They also did not examine the risks and benefits of short-term hormone replacement therapy used to treat the symptoms of menopause.

On the other hand, a later study published in 2013 by a team from Yale University seemed to contradict a lot of the findings of the previous study. They estimated that somewhere between 18,000-90,000 post-menopausal women had died prematurely because they avoided estrogen therapy, mostly due to the warnings of that 2002 publication. The two studies are not completely comparable, but certainly show that we can’t keep avoiding hormone therapy based on a study that’s almost two decades old.

The 2013 study I mentioned before and a more recent retrospective study published in 2018 conclude hormone therapy can reduce the chance of developing breast cancer, colon cancer, osteoporosis, and cardiovascular disease.

We know so much more now 20 years later than we did when that study first came out. What we know is that for most women, the benefits of hormone replacement therapy outweigh the risks. In fact, far outweigh the risks in most cases, especially if you start it when you’re relatively younger. If you’re 75 and you’ve never been on hormone replacement and decide you want to start now, we can’t really go back and change what’s happened over the previous 25 years and erase things. If you’re in your fifties and within 10 years of menopause, and we use the hormones going forward, then we see lots of positive benefits. It’s important to find a well-informed doctor who will base their recommendations on your unique health history.

It’s not only functional medicine doctors who like this holistic approach, but even many regular gynecologists have changed their tunes. Not all doctors have gotten the memo, but as a general statement our attitude about hormones has changed.

Now we want to give a personalized approach. We don’t want to blanket prescribe or give everybody the same thing, which is how I was taught to do it in medical school. We want to evaluate your personal symptoms, your personal health history, your risk factors, and your family history so we can take that all into account to understand what the best treatment for you would be. Even for those few small numbers of people for whom hormone replacement isn’t going to turn out to be the best option, we still want to make sure your gut is healthy.

We want to get the toxins out of your system, and make sure you’re nutritionally sound and that the inflammation is down. We want you to have the healthiest body possible, and we can do a lot to reduce hormone symptoms just by all the other things that we do even if we don’t use hormone replacement therapy. 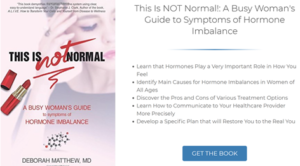 This Is Not Normal: A Busy Woman’s Guide to Symptoms of Hormonal Imbalance. 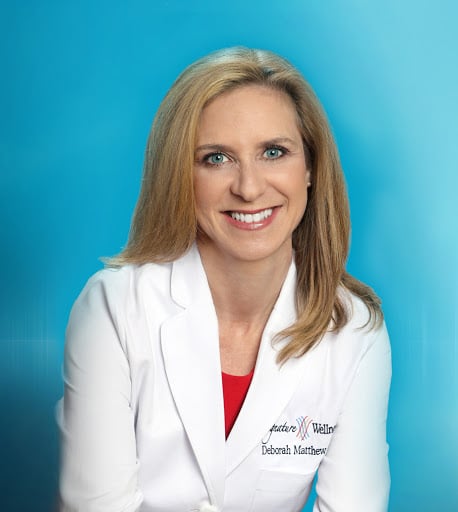 The Happy Hormones Doctor is a best-selling author, international speaker, wife and mom of 4 boys. She is a frequent guest expert on podcasts, radio, and TV news and talk shows, with more than 60 appearances on NBC, ABC, CBS, and FOX. Dr. Deb suffered for years with fatigue and irritability, and her quest to restore her own health led her to change everything about how she practices medicine. Now, instead of treating diseases with drugs, she helps resolve the root cause of your health issues to get your hormones back in balance – so you can get WELL, get OFF prescription drugs, and LOVE the way you feel!